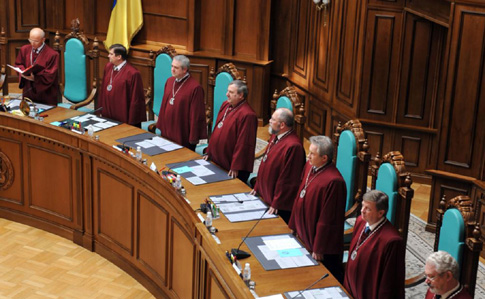 The law, which deepens Ukraine’s and the EU’s energy integration, was reviewed by the Constitutional Court

On May 28, the press service of the Constitutional Court of Ukraine announced the receipt of a referral on the compliance of particular provisions of the Economic Code of Ukraine, laws “On n the Cabinet of Ministers of Ukraine”, “On Pipeline Transport”, “On State Property Management” with the Constitution of Ukraine.

All these regulations were enacted by Law No. 264-IX, which formalized unbundling – a corporate, legal, financial separation of gas transmission system operator of Ukraine (LLC “GTS Operator of Ukraine”) from Naftogaz Group. The completion of this process took place on the morning of January 1, 2020, when the GTS Operator of Ukraine started operating as a subsidiary of JSC “Main Gas Pipelines of Ukraine” subordinated to the Ministry of Finance.

Such separation is necessary to avoid the conflict of interest that may arise in a vertically integrated enterprise which is simultaneously engaged in the transportation and production (supply) of natural gas. Naftogaz was such enterprise before unbundling. Also, these changes were aimed at fulfilling Ukraine’s international legal obligations to implement acquis communautaire in the field of energy, in particular the Association Agreement and the Treaty establishing the Energy Community. Without this, a newly created GTS operator would not be certified, and therefore would not be able to fully integrate into the European gas market.

So why has the law, which aims to deepen Ukraine’s and the EU’s energy integration, been the subject of the constitutional review?

The essence of the referral

The referring entities included 47 deputies of all-Ukrainian Association “Batkivshchyna” and “Opposition Platform for Life”, including odious politicians Yulia Tymoshenko, Viktor Medvedchuk and others. They demand to declare unconstitutional the provisions that give the GTS Operator of Ukraine a financial (Part 3 of Article 89 of the Economic Code) and operational (Part 5 of Article 136 of the Economic Code) independence, and also allow to determine their own organizational structure (Article 14 of the Law “On Pipeline Transport”).

The challenged provisions correspond to the logic and objectives of unbundling, regardless of the chosen model. As both Naftogaz and the GTS Operator of Ukraine are state-owned, their corporate separation is not enough. Separation is also needed in terms of management. Since 100% of Naftogaz shares belong to the Cabinet of Ministers, the Ministry of Finance as an entity of corporate rights management of the GTS Operator of Ukraine must be independent of the Cabinet of Ministers, in order to avoid conflict of interest between production (supply) and transportation functions. The Energy Community warned of the need for such changes yet in 2016 and remained uncompromising in the long-term unbundling process, which ended on January 1, 2020.

The provisions on the independence of the Ministry of Finance and the GTS Operator of Ukraine from the decisions of the Cabinet of Ministers have become the subject of criticism among authors of the referral. In their opinion, these provisions violate rights of the Cabinet of Ministers of Ukraine as an entity of state property management and contradict its authority to direct and coordinate the activities of other ministries (the Ministry of Finance). Moreover, the Main Legal Department of the Verkhovna Rada’s Head Office in its comments to draft law No. 2239-1 indicated that this act does not take into account the requirements of paragraph 9 of Article 116 of the Constitution, according to which the Cabinet of Ministers is responsible for direction and coordination of the ministries and other executive bodies.

At the same time, both authors of the referral and lawyers of the Verkhovna Rada of Ukraine did not notice other provisions of the Constitution – in particular, those that determine the irreversibility of Ukraine’s European and Euro-Atlantic course and empower the authorities (the President, the government, the parliament) to implement a strategic course for full EU and NATO membership. Without proper implementation of the EU directives and regulations in the gas sector, this requirement of the Basic Law could not be satisfied.

Not to mention that Ukraine’s obligations to implement Directive 2009/73/EU and relevant regulations are enshrined in the Association Agreement and the Energy Community Treaty ratified by the Verkhovna Rada in accordance with the Constitution of Ukraine and the Law “On International Treaties of Ukraine”. These obligations were last confirmed on June 6, 2019, when ratifying the amendments to Annex XXVII to the Association Agreement between Ukraine and the EU.

In general, the situation somewhat resembles the revision of the law on the NEURC. The combination of several moves included the CCU’s decision on the unconstitutionality of certain provisions, its negative conclusion on amendments to the Constitution (on assignment of the President’s powers to form independent regulatory bodies), as well as the parliament’s rapid adoption of amendments to the law. The result is that the regulator’s independence is called into question, as NEURC has become a central executive body with a special status, which means subordination to the Cabinet of Ministers.

The problem is so serious that even in the memorandum with IMF, the government has set a commitment by the end of March 2021 to bring the powers and responsibilities of NEURC in line with the EU’s Third Energy Package. If the CCU agrees with the arguments of referring entities, and the government ignores its own obligations, energy reforms may face further rollbacks.

What can we lose?

Undoubtedly, the principle of the rule of law is fundamental for a legal state, but it must be balanced by considerations of Ukraine’s national interests and its international legal obligations. The existence of an independent GTS operator is fully in line with such interests and Ukraine’s foreign policy.

Successful certification of the GTS operator (which actually certifies the compliance of unbundling with the requirements of Directive 2009/73/EC) has opened up a number of new opportunities. First, since the beginning of 2020, the GTS Operator of Ukraine has been providing a short-haul service or restricted capacities. This service allows traders to transit gas over short distances through the Ukrainian GTS (for example, from Poland to Hungary). It is much more profitable than alternative modes of transportation; moreover, our GTS can offer much more capacity. Since its introduction, the demand for the service has been growing on a monthly basis: according to data of the GTS Operator of Ukraine, more than 800 million cubic meters of gas have been transported by short-haul since the beginning of the year, and 15 out of 17 customers of service have been foreign traders. We shouldn’e also forget about virtual backhaul with Poland and Slovakia.

Another success of the Operator is the creation of virtual interconnection points (VIP) between the GTS of Ukraine and neighbouring countries (Hungary, Poland). The integration of several physical points into a sibgle virtual point is provided by the Network Code on Capacity Allocation Mechanisms in Gas Transmission Systems (NC CAM). It makes it easier for the customers to use adjacent networks. Moreover, Ukraine is the first non-EU member state of the Energy Community to achieve such level of integration and move to common business rules with adjacent operators. Another success is accession of the GTS Operator of Ukraine to regional GSA Platform and announcement of the first capacity allocation auction.

Thus, any unbundling revision contrary to the law of Ukraine and the EC may pose a threat to energy security of Ukraine, which risks losing the trust of the European partners and profits from new services and cooperation mechanisms. The reform of the gas market of Ukraine, which has been going on for the 5th year and coming to the end, can be “buried” by one decision. And then again we will have to fight against the practices of political interference into the work of the GTS operator, manual adjustment and distortions in the wholesale market.

Independent operators, like an independent regulator, are needed for efficient and competitive energy markets. This axiom has been adopted at the level of requirements and rules both in the EU and Ukraine. However, in order to maintain the trust of the European partners and to fulfil international obligations, reforms must not only be implemented but also protected, including from political games.